Home / Films / The Road to Redemption 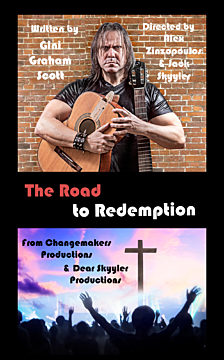 The Road to Redemption, inspired by the popular gospel song of the same name, tells the story of Rick, a down-and-out singer with few skills for getting a regular job, who finds redemption with the help of a preacher and becomes a popular gospel singers who inspires others at church.

Before then, Rick suffered from an abusive childhood, and as a teenager, he gets into fights with other kids, often takes drugs to escape, and ends up in prison for some burglaries and thefts. To escape his despair, he turns to music and starts singing in local small town clubs. Though he tries to meet some girls, they reject him as a loser. He writes some songs of heartbreak about unrequited love, break-ups, and love and loss. But nothing seems to be going right for him and he has trouble finding and keeping a job. Then, when he is working in a booth at a fair, a preacher talks about finding God and redemption.

So he gets inspired to write a gospel song, and on the last day of the fair, he gets a chance to perform it. Despite the small crowd, the preacher is impressed, tells him he has a gift for music, and says he will help him pull himself together. With the preacher’s help, he cleans up his life, performs at the preacher’s church, and soon he is writing songs about finding God, being redeemed, gaining God’s support, and the like. But after being baptized into this new faith, he lets success go to his head and nearly loses it all through partying, getting drunk, and attempting a burglary with some friends. But after he is caught, the preacher bails him out and gives him one last chance, leading Rick to clean-up for good. He not only sings, but begins to minister to others as a teacher in the church to show children the way.

The film is slated to begin filming in the fall of 2021.