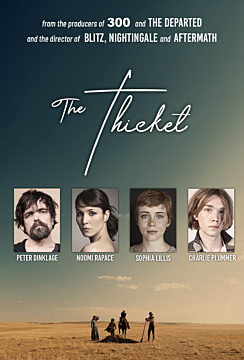 Based on the novel by Joe R. Lansdale, this dark thriller follows an innocent young man,Jack (Plummer), who goes on an epic quest to rescue his sister (Lillis) after she has been kidnapped by violent killer Cut Throat Bill (Rapace) and her gang. Jack enlists the help of a crafty bounty hunter named Reginald Jones (Dinklage), a grave-digging alcoholic son of an ex-slave, and a street-smart prostitute. The gang tracks Cut Throat Bill into the deadly no-man’s land known as The Big Thicket — a place where blood and chaos reign.