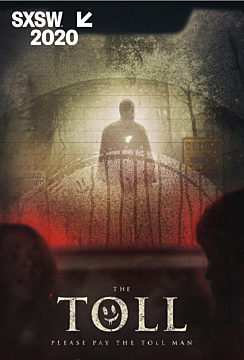 Weary traveler Cami just wants to get home. When her awkward Uber driver, Spencer, picks her up at the airport, she can’t tell if she should be afraid of him or feel sorry for him. As they make their way onto dark forest roads to her destination, their phones suddenly die and then the car stops all together. Spencer suggests they wait for someone to pass by, but Cami, suspicious he has orchestrated everything, is eager to get away from him. Cami abandons the car and franticly searches for the nearest house, but instead comes upon a car—Spencer’s. She’s somehow trapped in an inescapable loop. A mysterious woman arrives to help them, but explains she’s not where they are. Cami and Spencer are now in the Toll Man’s world—and the toll required to depart is a death. They will be stuck there until the toll is exacted, but perhaps only one of them has to die.