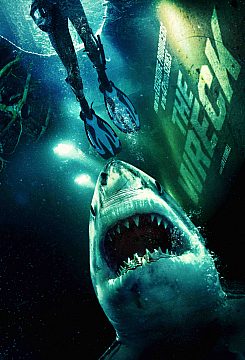 The Wreck tells the story of Noah, a Navy Seal dropout, who now guides tourists on scuba diving tours in the Virgin Islands. When his ex-girlfriend, Sam, comes to visit along with her brother, Brett, and their old college friends, Riley and Logan, Noah plans a special dive trip exploring the hidden wreckage of a World War 2 Battleship. But after celebrating a toast in a small airlock deep inside the wreck, they discover that they aren’t the only ones down there. When a great white shark attacks devouring Logan, Riley’s leg is badly cut on a rusted door trying to escape. With nowhere else to turn, the four survivors find themselves trapped inside the airlock. Now with blood in the water and their air running out, Noah and his friends must figure out a way to outwit the apex predator sharks lurking around every corner and escape the deadly underwater labyrinth before it’s too late.