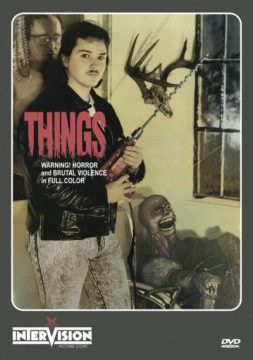 Severin/Intervision currently has North American Rights to the Original Release. (They have Relicensed THINGS again for the Second Time) All other Territories are currently Available with the exception of Japan,which is currently under License. We are also entertaining other Licensing Rights Offers. (T-Shirts, Comic Books, Novelization, etc) The Original Soundtrack was just currently Licensed, and will be Released in the near future. THINGS was Released on VHS in 1989, it has a Cult Following of Fans that continues to grow.

An impotent husband, driven by a fanatical desire to father children, forces his wife to undergo a dangerous experiment. The result: the birth of a multitude of monstrous THINGS.