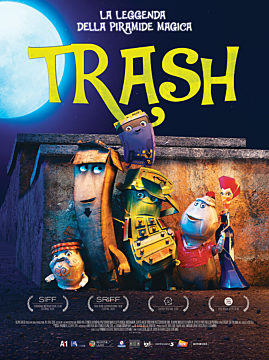 Boxes, bottles, cans. Garbage. Abandoned everywhere. Ignored by everyone. Inert. Until nightfall. Slim is an old cardboard box. Resigned to his fate, he doesn’t believe in the legend of the Magic Pyramid: a magical place where it’s possible for all garbage to be Carriers again, useful to themselves and others. His life changes when a small box, Spark, interrupts his routine. Spark involves Slim and his pal Bubbles in an adventure which will take him to the place where he belongs, a toy store. But someone is looking for Spark. The disused Kudo, lord of the landfill. Kudo’s gang pursues the group until they capture him. After an epic battle Slim saves Spark and they are able to find the Magic Pyramid. At its feet their destiny is fulfilled, they are given a second chance: another life.