Home / Films / Under the same sun 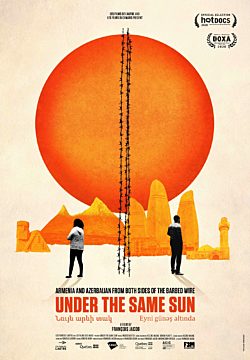 Under the same sun

War and peace. Nothing less, that is the bottom line of this current affairs creative documentary. The location is Nagorno-Karabakh, a mountainous region in South Caucasus, divided by centuries old ethnic conflict – like Jerusalem. Under The Same Sun takes an observational and objective approach for ongoing conflict. Conflict that is responsible for the lost of thousands of lifes, forcing hundreds of thousands into exile.

The story is presented by Akram Aylisli, Azerbaijani writer living under house arrest, due to promoting peace and presenting Armenians in sympathetic light. Aylisli’s dream – that Armenians and Azerbaijanis could live in peace – is shared by young journalist Ravan Seyfullayer. His Azeribaijani family are Nagorno-Karabakh War (1992-1994) refugees living in Baku, capital of Azerbaijan. It is Seyfullayer’s belief in people, and his quest against militarism and nationalism, that highlights the true political nature of this conflict: both Azerbaijan and Armenia use war to govern and maintain public order.

Dreams, hopes and idealism is one thing – and reality is something else. Deep wounds, rancor and mistrust are inevitable products of violent conflict. This becomes obvious when the director François Jacob takes us from house to house on both sides of the border.