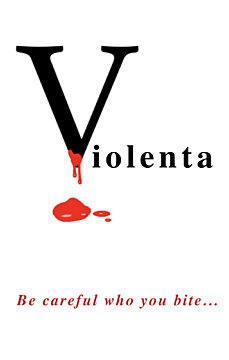 By turns furious, and by others endearing, our story follows Violenta, a ferocious trans vampire vigilante who kills men like the ones who victimized her as a child, while she struggles to use justice over vengeance, in order to protect her family.

Rafi lives in an impoverished household in New Orleans ruled by his father, Pedro, who often beats him and his mother. Rafi’s mother, Dolores, does her best to protect Rafi when Pedro finds him wearing makeup and dresses, but her attempts often fail and just add to her husband’s rage.

Dolores sends Rafi to a school away from home for his safety, but bullies threaten Rafi's life and he runs away into the city’s red-light district, where he meets ‘La Gitana’ (a Romani woman), who sinks her fangs into the child’s neck. Their bodies merge, and he becomes an androgynous vampire named Violenta.

Branded by violence, Violenta becomes a vigilante predator, confronting men like those who victimized her. She maintains a relationship with Sandy, a trans woman whose level-headedness contrasts with Violenta’s boiling anger at the world

After years of watching her biological mother from afar, Violenta decides to visit Dolores, who remains married to Pedro without any agency in her life. As Dolores marvels at her daughter's new powers, she grows in confidence and assertiveness herself.

A houseless surrogate child named Truman; a crumbling relationship with Sandy; a handsome, mafioso love interest named Armando; Violenta's abusive father, Pedro; and a newly-emancipated but dangerous Dolores drive Violenta’s life into chaotic spirals of conflict and tender lessons that force our heroine to learn the difference between justice and vengeance, in order to save the ones that she loves