Home / Films / Whacked! Where Are They Now? 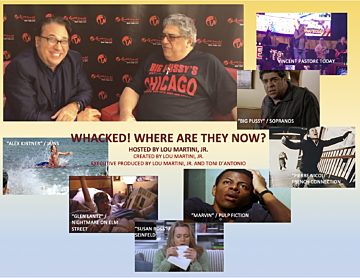 Whacked! Where Are They Now?

Host Lou Martini Jr. of the Sopranos, he himself being “whacked” off numerous Film/TV shows amongst them the CBS hit show “Falcone”, will find and update us on some of the most famous death scene actors to ever grace our screen in television and film... ONCE! Where they are now will surprise and entertain you!

The show will open each episode on a famous TV or Film death scene and ask “Where Are They Now”? For some, the death scene was the beginning of a road to stardom – like Kevin Costner’s one quick casket shot in “The Big Chill”, or Johnny Depp sucked into the bed in “A Nightmare on Elm Street”. Others were just a blip, in a career to somewhat obscurity – like the brilliant, but definitely underexposed Scott Wilson of “In Cold Blood”.

What ever happened to that guy Marvin, who got shot by John Travolta in the back seat of “Pulp Fiction”? One episode will follow up on the actor Phil LaMarr. You’ll be surprised to know he’s become one of the biggest Voiceover actors since then. And Vincent Pastore, Big Pussy from “The Sopranos”...is that him singing with a band in Atlantic City? Far cry from being whacked off a boat by Tony Soprano and crew.

We will chronicle the actor’s real life and screen life and discover what they’ve been up to since their infamous death on screen. Some will end with all the glory and awards of a big time star, while other stories may end up in the saddest ways imaginable. The actors’ journeys will sometimes be uplifting and courageous. Sometimes their stories will be disturbing and heartbreaking, but always informative.