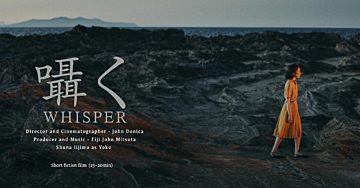 Due to the the massive earthquake and tsunami disaster on 03/11/2011 in Fukushima, Yoko lost her husband and her eight year old son Yuta. For three years she struggles with grief, and one night she hears Yuta’s whisper from a phone booth. She attempts to speak with him... a mysterious sign of life. Yoko wakes up in an unrecognized place, her pursuit begins. Directed by award-winning director and DOP John Donica.