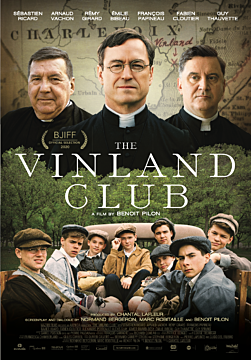 The Vinland Club is the story of an exceptional educator in a boys’ college, in the late 1940s. Adored by his students but perceived as too progressive by the superiors of his congregation, the charismatic Brother Jean proves to be an advocate of the changes to come in the 50s and 60s. Wanting all at once to solve a historical enigma, to motivate his pupils and to prevent Emile, a struggling student, from dropping out, Brother Jean leads his students on an archaeological excavation aimed at proving the establishment of an ancient Viking colony on the coast of the St. Lawrence river. The journey will turn the life of the college upside down and leave its mark on the destinies of young Emile and on Brother Jean himself.