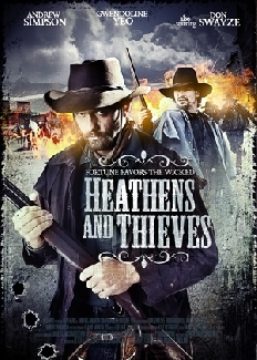 When two drifters hear rumors of a Chinese railroad worker hiding stolen gold at a isolated ranch, the desperate men put a conspiracy into motion to steal the “Chinaman’s Gold” themselves -- before other interested parties close in.

Saul, one of the drifters, uses his charm and his horse skill to get hired as a ranch hand, while partner Bill lurks in the shadows waiting. To betray his new Chinese boss Zhen into revealing the treasure’s location, Saul tries every trick he can think of, even playing on the sexual tension stirring between him and Zhen’s beautiful wife, Kun Hua.

But their game begins too late. One by one, others arrive: a group of mercenaries representing ruthless bankers, a shady gunman who might be a federal marshal, and the local sheriff and his deputy -- all have motives of their own. Saul finds himself up against far worse men than himself and is forced to shift plans and allegiances in a deadly multi-sided face-off of bluffs, gambles, and betrayals as he struggles to find the gold and come out alive.