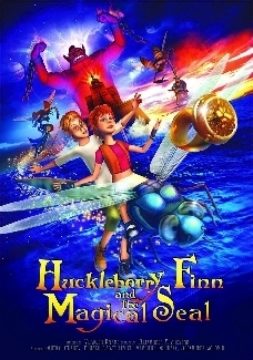 Huckleberry Finn and the Magical Seal

Many centuries ago, in the time of King Solomon, the King became
angry with the mighty genie Yusuf and cast a spell to imprison him in
a clay pot, sealing it with his magical ring.
Years give way to centuries... until one day, the genie finds himself
free in present-day Moscow. By some crazy coincidence, he is released
from his prison by the young Huckleberry Finn and his friend, the runaway
slave Jim, also transported by magic from nineteenth-century
America to the streets of the modern-day Russian megalopolis.
But this is only the beginning of their adventures. The power of
King Solomon’s ring is so great that it commands the ancient demon
Kishkash to pursue Yusuf across time and space. But Kishkash has his
own agenda: if he can steal the King’s mighty ring, he will plunge the
world into eternal darkness and chaos.
The decisive battle is fast approaching...