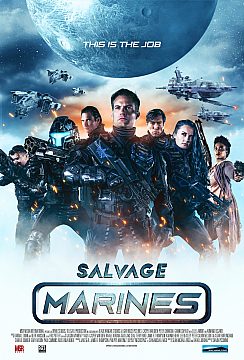 In a grim future of corporate tyranny and deep space combat, Samuel Hyst has endured his life as a factory laborer, daring not to dream of a life beyond the polluted industrial planet of Baen 6. Everything changes when his young wife, Sura, reveals that she is pregnant. Now Samuel is faced with the harsh reality that his child will be born into the same debt servitude that he was. Determined to create a better life for his growing family, Samuel and his best friend Ben Takeda sign up for the hazardous life of a salvage marine, the foot soldiers of a militarized deep space operation. They are older than the other recruits of Tango Platoon, and right away have to prove themselves as they suffer through the grueling pace of marine battle training. No sooner than they are prepared for their tour of duty across the scrapyard quadrants of this war-torn universe, they are hurled into frenzied combat against murderous scavengers aboard a derelict starship. After barely surviving their first encounter, the marines find themselves upon the battlefield once again, this time in the dark confines of an abandoned mining colony, hunted by hideous creatures that emerge from the tunnels. Even as Samuel struggles to survive his tour of duty, he must contend with matters of the heart, as his marriage with Sura is tested by the affections of a beautiful marine Jada Sek. Before Samuel can put the pieces of his life back together, he and the marines of Tango Platoon are dispatched to a remote factory compound, where they are faced with their hardest fight yet. A rival corporation has sent elite mercenaries and mech warriors to confront the salvage marines. Out numbered and out gunned, will Samuel and the marines survive or will they end up just another expendable resource for the corporation?