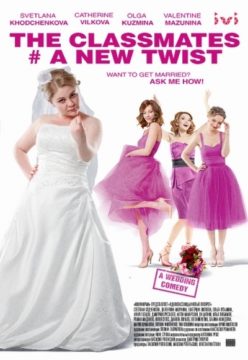 THE CLASSMATES# A NEW TWIST

A year has passed since the events from the first movie. Katya is still working as a producer for television adverts and is happy with Vasya. Vika is still planning weddings, but once again her personal life is full of uncertainty. Sveta is a counselor and has found some common ground with her husband, Dasha's situatuin is the most complicated. She simply cannot get any decisive action out of Misha.But, when Misha gets it together and proposes, she doesn't have any doubts: the wedding will be in Sochi.

And so the girls find themselves back in that wonderful city by the sea. They celebrate their reunion and then... Fate once again serves up an unwanted surprise! Misha arrives the next day and can't even remember who his own fiancee is; his behavior is totally inappropriate. Dasha is convinced that this is not the real Misha! Someone has stolen her husband-to-be and replaced him with another man, albeit someone who looks surprisingly like Misha. As a results of all the stress, Dasha passed out.

The moment has come to test the depth of her friendship. What should the girls do: brush aside Dasha's suspicions as merely pre-wedding jutters, or listen to the voice in their heart.