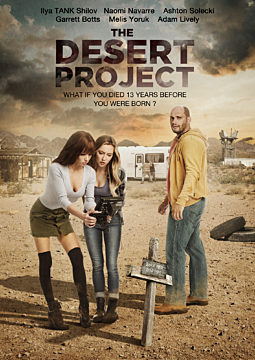 Logline: A run-away military experiment sends a student film crew back in time, launching a 37-year quest to regain manipulate the future.

Synopsis: Ida and her friend Rebecca return to Ida’s house after a harrowing day in the desert where their film-crew friends vanish. Through some quirk in technology it appears they went back in time where Ida’s then 30-year-old father kills a crew member during a fight. Ida takes Rebecca to her father’s workshop where they look at an old 16mm black-and-white film that captures the fragements of events from that day… a 35 years ago.

Ida realizes that a fight she had with her father a few days earlier over becoming an actress has led to arrange for the crew that has gone missing. In her desperation to enter film school, she and her friend Rebecca hire Boris – who becomes her father – Eric and Bethany (Matthew and Marti, who will marry in their new timeline), and Drake – who Boris kills 35 years in the past – to create an audition reel set in the desert near Ludlow, CA, on a closed military reservation where a secret experiment is about to take a nasty turn. The experiment miss-fires and the crew are thrown back in time while Ida and Rebecca are still in route to the location. Modern technology stays in the present, while some things like the RV and a 16mm camera are duplicated in 1985.

The accident scrambles the brains of Boris’ digital camera, which remains in 2019, allowing Ida and Rebecca to witness Boris and crew as the fight ends with Drake’s death. Tracking the subsequent cover-up - burying Drake in the desert – they discover not a fresh corpse but the remains of a long-dead Drake.As long as the battery lasts and they are in relatively close to the site of the accident, the girls can see what is happening. But once they follow the crew’s old RV out of the desert, that connection ceases.

But Ida is not discouraged. She has guessed where the crew is going and she and Rebecca take the duplicate RV from the desert back to the hotel. There they confirm that the crew never made it to the motel in their timeline, but Ida has seen enough to make the connection to the 16mm film her father watched when she was a child. Ida and Rebecca make a mad dash back to Ida’s house where they break into her father’s “man cave” and review the old film.

Boris, his wife Marti, Matthew, and Susan are in Boris’ living room, watching the evening news for a story about the accident near Ludlow. They are surprised when a missing person’s report flashes on the screen, showing the four members of the crew. But they don’t have long to worry how the news reached the television so fast. Ida and Rebecca burst in on their gathering and Ida accuses her father of being the Boris from 2019 and Drake’s killer in 1985. The situation grows tense before the doorbell rings. An Air Force investigator has arrived looking for the teenage students only to be informed by an irate and indignant Ida that her father and his friends are murders from that morning… and 35 years in the past.

THE DESERT PROJECT moves rapidly between 2019 and 1985 with non-stop action and drama as Ida tries to unravel just what happened in the desert that morning and what forces have controlled and molded her life… perhaps even creating an inescapable destiny manipulated by her father.