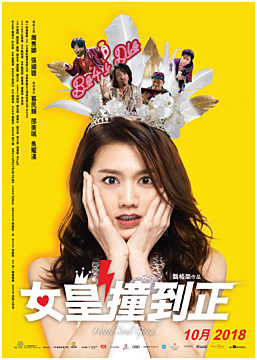 Katie (Chrissie Chau), who grew up as an orphan, is determined to leave a lasting mark on the world. By the age of 30, she's a top executive at a 5-star hotel. She has climbed the ladder of success, but only by becoming mean-spirited.

In a series of setbacks, hotel owner Michelle (Michelle Loo) steals her boyfriend and fires her! Just when things couldn't get any worse, she falls into a coma when she is struck by debris from a meteor shower. Her heart stops for seven minutes.

When she regains consciousness, she is able to see dead people! Specifically an old man (Richard Ng), middle-aged Fai (Eric Kot) and Auntie Yan (Maggie Shiu) who end up moving in with her. All three are dressed in the height (and depths) of 1980s fashion.

The three ghosts take over the body of John (Louis Cheung), a man who is born with bad luck. He becomes their real-world mouthpiece. Katie begins to cherish her new friendships, since they each have a great sense of humor.

She opens up her own hotel called "Be4 I Die" where guests can laugh at death and experience a glimpse of their own afterlife. Meanwhile, Katie helps the three ghosts make peace with the material world and move on, as she finds her own peace of mind.