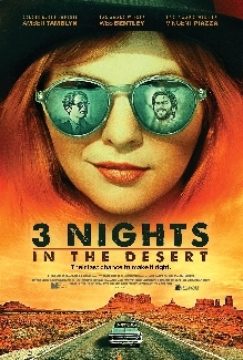 3 Nights in the Desert

At a remote desert property, three estranged friends and former bandmates reunite to celebrate turning thirty. Travis, the wild man of the group, leads his friends to a powerful cave that supposedly grants the wishes of anyone who enters inside. Though they laugh at his myth, the others ultimately go inside. By nightfall, unsettling desires begin to surface, and the three begin to wonder whether the cave really does have the power to threaten all they hold to be true.

Featuring Music from the internationally known Hit Indie Band, EDWARD SHARPE AND THE MAGNETIC ZERO’S, whose recent album debuted at #1 on the Independent Music Chart, #5 on Billboard Top 200 Chart and #7 on Rolling Stone’s “Best Albums of 2012″ List.