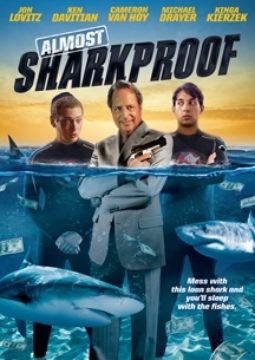 Broke, busted, and living in a tent outside their parents backyard, Vince (Cameron Van Hoy) and Freddy (Michael Drayer) hit on the idea of a lifetime - shark proof wetsuits - and are determined to strike it rich. They go to a local loan shark (Jon Lovitz) who owns a club in downtown LA to fund the venture. At the club they both fall in love with the same girl, Isabella (Kinga Kierzek) the receiving half of a knife throwing duo who are performing at the club. Yuri (Ken Davitian) is her drunk, knife-throwing partner. After several Ferrari-fueled car chases, shoot outs, and mob mayhem, two heroes save the girl and take down the loan shark's mob. 'Shark Proof' is a buddy comedy in the vein of 'Wedding Crashers' and 'Cop Out'.