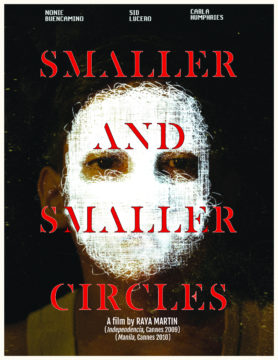 When a dead boy is found in the trash heaps of a thirteen-hectare dumpsite, nobody cares enough to notice. A news report might pick up the story, but when the victim is a nameless, faceless kid from a poor community—is anybody watching? Father Gus Saenz (Nonie Buencamino), a forensic anthropologist and a Jesuit, finds himself caught up in the case as an alarming number of dead preteen boys turn up in the dumpsite. Father Gus and his colleague Father Jerome (Sid Lucero) have the help of Joanna Bonifacio (Carla Humphries), a young reporter, as they investigate the murders through the cramped urban landscape of Manila. Based on the award-winning novel by Filipino author F.H. Batacan, Smaller and Smaller Circles illustrates the best and worst of human nature: the antiseptic and dirty, the sublime and rotten, the hellish and divine.