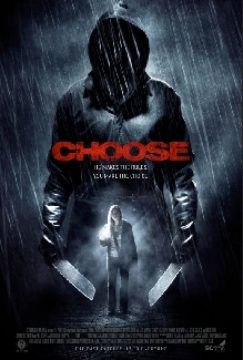 The peace and tranquility of an idyllic, suburban city is suddenly broken. Behind the picket fence and manicured lawn, teenage Sara awakens startled as a rush of cold air gently pushes her bedroom door open. Across the hall her parent's bedroom door lies ajar. She calls for her parents - no response. She enters their bedroom and as her eyes adjust to the darkness she sees her parents on the bed hog-tied and gagged. Before she can react she is grabbed roughly by the hair and slammed against the wall. "Do what I say or you die" Scarlip tells her.

He turns over an expertly crafted hourglass filled with blood and coolly instructs her, "I'm going to kill your mother or your father. You have sixty seconds to decide which one." She begs and pleads with him, but all Scarlip tells her is that if she doesn't choose then both parents die. And this is just the opening sequence of the chilling horror Choose.