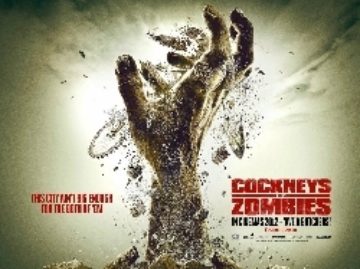 Cockneys vs Zombies is the story of Andy (Harry Treadaway) and Terry (Rasmus Hardiker): two hapless cockney brothers who try to save their grandad's (Alan Ford) care home by robbing a bank. At the same time, a virus sweeps across East London turning all the inhabitants into flesh eating zombies. Faced with hordes of undead zombies, the challenge is to rescue a home full of tough old folks, escape with the loot, and get out of London alive!

n. pl. cock·ney or Cock·ney kokni
1. (Social Science / Peoples) (often capital) a native of London, esp of the working class born in the East End, speaking a characteristic dialect of English. Traditionally defined as someone born within the sound of the bells of St. Mary-le-Bow church.

2. (Linguistics) the urban dialect of London or its East End for example "Dog and Bone = Phone".