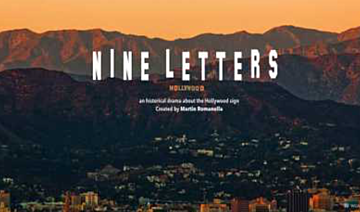 Nine Letter is a miniseries of 12 episodes,one hour each.

It is an anthology that takes in a hundred years of the Hollywood Sign’s history and the events surrounding each of its 9 letters.

Based on real characters and events, this is a historical drama

In three years’ time, on 8 December 2023, the Hollywood Sign will celebrate its 100th birthday, an occasion sure to be marked with much fanfare.

In 1978, to mark the 75th anniversary of Hollywood’s incorporation as a city, the original sign was replaced by a new one. The unveiling, for which the sign was surrounded by a mass of searchlights flooding the sky above with beams of light, brought in a television audience of 60 million in the United States alone.

In short, ours is no ordinary protagonist. This is the story of 9 letters in sheet metal that form a sign 13 meters high, 106 meters long – 9 letters that spell out ‘Hollywood’.

A meditation on adaptation and reinvention.