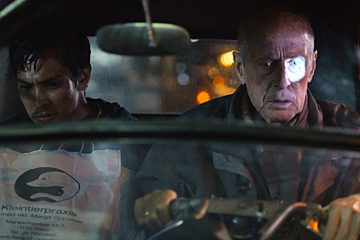 Heinrich Senft, a 93 year old, cranky pensioner, lives on a small allotment in Vienna. His dog died during the night and he wants to dig a hole behind his cabin to bury him. But failing to dig it himself he begrudgingly hires a young man from Afghanistan, Adib. While the two struggle to trust each other, Adib finds ways to pacify and appease the angry old man. Senft finds out that Adib has a wound on his foot, which seems rather badly covered up, but Adib pretends that all is well. When the work is done, Senft seems relieved to have the foreigner out of his back yard. Yet a little while later, when Senft finds Adib unconscious at the bus stop, he knows he will need to help the young man. When Adib regains consciousness, he refuses to go to hospital out of fear to be deported. Senft decides to take matters into his own hands to save this young man and the two spend a night together that is so full of chance, will-power, and inner revelation, that it sometimes appears hard to believe that these two found each other.