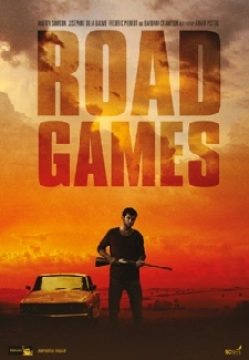 Jack, a handsome young Englishman, is stranded in rural France after his bags are stolen. As he attempts to hitchhike towards Calais, he struggles to
communicate with the people he encounters. Warned of the ‘road killer’, a serial killer that dumps his victims on the roadside, Jack begins fearing the surrounding dangers. Feeling more vulnerable and foreign than ever, he never expected a place so close to home could feel so unknown to him.

Jack’s luck changes for the better however when he meets a beautiful French girl called Véronique. They decide to stick together to keep each other company and over the course of a night spent around a campfire in the woods, an innocent romance begins to blossom between them.

They finally catch a ride with Monsieur Grizard, a quirky middle-aged Frenchman, who offers to drive them to Calais, despite it being out of his way.
Though the weather soon changes for the worse and he suggests they stay the night at his house, where his English wife will cook them a roast dinner. Jack and Véronique reluctantly agree and find themselves warmly welcomed into the local couple’s home.

After a tense and peculiar dinner, they discover a ferry strike means they may be stuck with the couple longer than anticipated, and over the course of the evening they find themselves becoming inexplicably entangled in their lives.

The bond between Jack and Véronique strengthens as they passionately make love that evening. After all his troubles, Jack feels as if his life finally seems to be making a beautiful and positive change for the better. This feeling is short lived, however, when he wakes the following morning to discover that Véronique has vanished. M. Grizard informs him that she left earlier in the morning and sent her best wishes with his onward journey. He also apologises to Jack for his plans must change, and he can no longer ride him to Calais.

Baffled by Véronique’s unexpected disappearance, Jack’s heightened suspicions over the couple’s motives for helping them intensify when he is kidnapped by Delacroix, the local ‘road kill collector’, a seemingly vicious man that makes Jack realise everyone is a suspect. It becomes clear that the Grizards are holding Véronique captive though their intentions for doing so are mysteriously unclear.

Jack finds his only option is to attempt breaking free from the grasps of the vicious local, holding on to the hope that he will be able to find Véronique unscathed, and to escape the Grizard residence and the enigmatic countryside before something terrible unravels wildly out of his control.