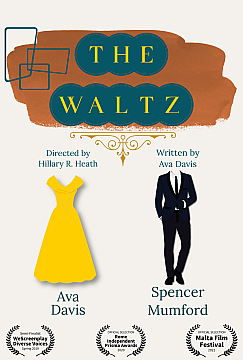 The Waltz is unique, while universally relatable, story about the dating experience and offers a fresh take on a tale as old as time…

Career-driven Claire has fully transitioned into a woman and finds an unlikely partner in Dave who can her realize her lifelong dream of learning to waltz, but both find themselves unsure of the others' feelings.

This is just a straight-up girl meets boy romantic comedy, with a trans actress as the lead. To watch the virtual staged reading we held in September of 2020 via Zoom, please visit our link here. Password - letsdance

It’s 2021 in Atlanta and 29-year-old Claire Villeneuve has made it. She landed her dream job at a creative agency in town three years ago and has made a name for herself in the industry. She maintains a strong and close relationship with her family, which she feels fortunate to have. She came out in college at Emory University, and started HRT and socially transitioning. She worked and saved to fund her GRS.

Unfortunately, after her Previous dating experiences after coming out socially, but not medically transitioned, it turned her off of looking for a relationship.

Dave Norfolk has a steady career in developing and selling commercial real estate and fresh out of a long term relationship. He maintains a close relationship with his sister, while still seeking the approval of his father.

Claire and Dave meet, by chance, after Claire signs up for a dance class. She happens to sign up for a class where Sydney, Dave’s sister, has brought her wedding party to learn a dance to perform at the wedding. In the intro class, Christy teams Dave and Claire up, only for Dave to participate unenthusiastically after being partnered. Claire leaves the class early, castigating herself for putting herself in this position.

Dave runs after her to apologize, and to pitch that the two of them learn to dance together as amends for his boorish behavior. Claire agrees, reluctantly.

As the two learn to dance together, Sydney suggests that Dave invite Claire to the wedding as his partner, after one of her bridesmaids drops out.

Claire and Dave dazzle at the wedding and almost manage to outshine the bride and groom. After their dance, claire realizes their journey has come to an end. Dave suggests they take more classes, including The Waltz Claire has dreamed of learning.

The relationship between the two continues to develop, and one night at class, Claire asks dave to return the favor and accompany her to an award dinner. Dave asks Claire to dinner with her sister Sydney and her husband. The two agree to each other’s requests. At the dinner with Sydney, it suddenly dawns on the two that they’re on a date, and claire suggests a toast to just friends. Hurt, Dave hides his feelings for the rest of dinner but asks Claire afterward on a walk. She tells him she’s afraid of getting hurt, and if they’re just labeled friends it’s easier to call it that. The two agree to “just friends,” even though claire is already falling hard.

A night out after dancing and the two run into Dave’s co-workers. Claire excuses herself so Dave can catch up and celebrate their win on a big account. Dave’s co-worker asks what is dave doing, and reminds Dave of the world they live in.

At the next dance class, Claire asks Dave out for drinks, only for Dave to disclose he has a date. Hurt, Claire leaves. Dave chases her down, only for the two to confront each other. Claire asks Dave to leave her alone so it hurts less.

Fast forward three years into the future and Claire is getting ready to leave just as Andrea did in the beginning. She’s engaged to the bartender, Justin, and the two are in the midst of planning their wedding when Dave and Claire pass each other on the street. Dave calls Claire at her office, only for Claire to ice Dave out. Dave sends Claire a package, with the Beauty and the Beast DVD and asks her to perform the waltz he promised her. Claire meets Dave in the ballroom, he in court attire and she in a ballgown, and the two dance to “Beauty and the Beast.” They reminisce, and dave asks if it’s too late. Claire doesn’t answer, and the two end on a kiss.

First off, The Waltz is heavily inspired by Beauty and the Beast and Shall We Dance, with the sprinkling of romcoms such as How To Lose a Guy in 10 Days and Trainwreck. I think we can all agree that these feature, for the most part, white cisgender woman as the romantic lead.

I have a love-hate relationship with romantic comedies. I love the fantasy and allure of finding love, but realistically those scenarios aren’t possible. They feel even further out of reach by being trans, because the biggest question that comes up, for me at least, is will they see me as a woman? Will I always feel in competition with cis-women, and never feel like I am enough in the relationship? Claire’s character mirrors my torrid love affair with Beauty and the Beast.

This film arose out of a thought experiment, in the early stages of my transition before I’d started hormones or started to socially transition. As I sat in a coffee shop, I thought about what a meet-cute would look like for someone like me. How to disclose so much, and the fear that comes from being that vulnerable with the possibility of rejection.

This story feels incredibly personal, and makes me emotional every time I come to work on it, because of what it represents to me, and also what I see other trans women talk about when it comes to love - the fear of rejection, the frustration in going out on several dates only to disclose one is trans and then be rejected, searching for a partner and someone to love and trying to weed out the fetishists or perverts. It can be incredibly exhausting and demoralizing.

The beauty I think in seeing a story like this is for all the transwomen who are the heroes in their own stories looking for love. It has a bittersweet ending, in hopes of not painting an unrealistic portrayal of finding love but instead knowing that sometimes you can really like someone and feel that chemistry, but at that point in your life it’s just not right for either of you.

When I first read the script for The Waltz I was moved by the universality of the script but also the specificity of the story. Audiences are familiar with the traditional rom-com and they affect us because often they are our stories - unrequited love, being rejected, falling head-over-heels. But rarely, if ever, do we allow our ingenue to be someone other than an attractive cis-gendered woman and that is only part of what makes The Waltz special.

This film follows a young, confident trans-woman, Claire, who knows the love she deserves and is willing to work to get it. She is successful at work and pursues her passions and hobbies through dance classes. She has a full life and needs someone to share that life with. This is far from the trans representation we typically see in film and media. Trans women are often cast in minor roles, usually their characters' stories are filled with pain and discrimination. The Waltz breaks from that norm and shows us a different story- the story of a woman who has not lived a life without difficulty, but a woman who has overcome, who does not let her past define her and instead seeks to find joy and give joy in return. As the director of this film, I plan to show the audience a new story about love, romance, and happiness. A film where every woman can feel seen and heard.

I have worked closely with Ava during the development of this script and one of the most important elements of this film will be the music. Music has the incredible ability to make us swoon, give us goose-bumps, and make us feel alive. The character of Claire is no different. She listens to her favorite songs when she gets dressed in the morning and dances down the street. She knows the difference between a song that is made for a tango and one made for a samba. Her life is alight with music and the filmmaking will reflect the incredible fullness that music brings to her life. While staging the preliminary readings of the film, one of the most important things was for us to be able to incorporate the music we intended for each scene and see how it helped to create the world of the film. With music, a dance between two people becomes intimate, fun, and romantic. Because of this, music is one of the most important elements in the filmmaking for The Waltz. A large portion of our budget is dedicated to post-production sound and music costs to help bring this aspect of the film to fruition.

The Waltz is also a dance film unlike one we have seen. We are familiar with films like Black Swan, Save the Last Dance, and Step Up but what this film offers audiences is a chance to see partner dance in a new way - a hobbyist who just wants to express the rhythm she feels within. It isn’t just about sensuality like in Dirty Dancing, it’s about friendship, romance, and learning about yourself. Claire pursues dance not to meet a man, but to meet a personal goal. Her life is a dance, she flows from moment to moment sure-footed and confident. The dance element will also be incorporated into the visual aspects of the film with the use of Steadicam and fluid movement. The film itself should feel like a dance, a waltz that the audience and Claire are dancing together.