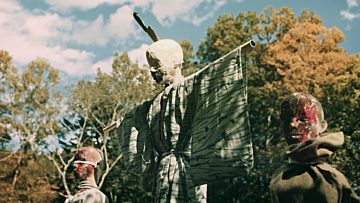 A 24-year-old talented director produces a controversial original action thriller. Ordinary college students dropped by a strange village on the way to their camp. Persuaded by a seemingly friendly villager to stay over, but brutal killings start to occur in the following morning.

On a night out in the city, Yuki, Takanori, Urara, and Nagomi make a plan to go on a camping trip the following morning. They meet their friends, Kento, Keisaku, Makoto, and Mutsuo in the morning. Yuki, Takanori, Urara and Nagomi are the rowdier ones whereas the rest of four are quieter.
Before they reach the camping ground, they get a flat tire. In remote mountains, the group of eight have to abandon their vehicle and walk to find help. They walk through a tunnel and find Tatsukiri Village (Cut Dragon Village). They're feeling spooked out when a seemingly friendly old man called Shinjiro approaches them. When he hears about the flat tire, he offers to help. In the meantime, he suggests that they come back to his place, and the group of eight are persuaded by Shinjiro to have dinner and to stay over.
Next morning, Yuki awakens and sees the villagers marching around wearing strange masks. Yuki wakes up his friends so they can escape, but Keisaku is missing. While they eat breakfast, Takanori suddenly groans, a knife's stuck in his back, and he soon dies. His friends are in shock when they find themselves surrounded by masked villagers with guns. One of them is that friendly Shinjiro. Makoto is dragged out of the house by Kotaro, one of the young villagers.
The friends are told that there's a law in the village that the flesh of young visitors must be offered to Supernatural Master, Obintawara. Kunimura, the village leader, appoints Nagomi as the next sacrifice. When Shinjiro uses his gun to push Nagomi forward, she tries to get the gun out of Shinjiro's hands, but it goes off and kills Kento. Nagomi snatches the gun and runs away. Urara and Yuki follow her, and Mutsuo runs after them. They hear a gunshot but can't turn to see if Mutsuo made it. As the three run for their lives, Nagomi accidentally trips over and shoots herself in the head and dies. Then Urara is shot in the head by a pursuing villager. Only Yuki is left. Driven by fury, he is determined to avenge his friends' demise...