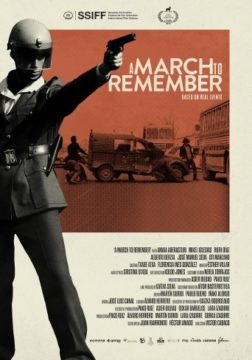 A March to Remember

In 1976, Franco’s death still very recent, Vitoria is a tranquil provincial capital. A city of “priests and soldiers”. Jose Luis, a journalist for a local radio station, is fed up reporting on the boring, everyday news of a small city. He decides to accept the position of manager of the radio, in exchange for being able to embellish the news in favour of the establishment.

Begoña, his daughter, is a young university student. She’s a proud dreamer and has become completely immersed in the current political climate of workers’ strikes. She spends her days between assemblies at the university and meetings at the house of her boyfriend Mikel, who the police are sure is one of the movement’s organisers. Begoña has no doubt over her intentions, she wants to fight for a better world and her parents’ concerns are of little importance to her. Her parents will also find themselves caught up in the violent situation, which will end up affecting them a lot more closely than they could have ever imagined.

Many lives crossed paths and were changed forever that day. Real police recordings, which were later released to the public, stunned the local and national community and ensured that the events of 3rd March, 1976 would forever remain recorded in the collective memory of a city which on that day, changed forever.