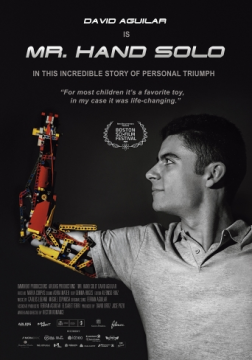 David Aguilar is a teenage boy who lives in Andorra. He was born with Poland Syndrome, a disorder that led to him having a deformed right arm. But David never let his disability interfere with his passion for LEGO. As a child, David would construct vehicles and toys with the world-famous building blocks, something that would eventually lead him to build his very own prosthesis out of LEGO, and he’s been improving it ever since.

David’s first attempt at building an artificial limb out of LEGO came at just 9 years old. However, the building blocks available at the time just weren’t strong enough to withstand the requirements of daily life. Several years later, David used a LEGO helicopter kit to build a completely new arm out of a much stronger material. The result was so successful, that David actually updated his arm with another model at the start of this year. This time, he used parts from a jet plane model kit.

David’s engineering skills go a lot further than this, however. He was also able to install a battery that functions as a bicep, as well as a fishing line that allows him to maneuver his arm like an able-bodied person would. Apart from his passion for LEGO, David is also an EDM musician, who goes by the name “Hand Solo”.