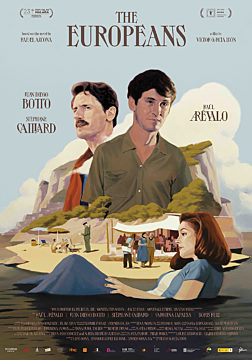 Spain, 1958. Two young single friends, Miguel, a shy man from the provinces who’s struggling to make a living as a draftsman and Antonio, the charismatic only child of a wealthy architect from Madrid take a trip to Ibiza, lured by the European sexual myth and the illusion of freedom. Once there, in the town of San Antonio, they will find themselves accompanied by a community of liberal, eccentric, almost tragicomic characters. As they let their hair down and start to enjoy the freedom from the usual social constraints of the time, they will soon become just two more of the island’s castaways.

While Antonio, the more extrovert of the two, embarks on a series of amorous adventures, Miguel finds himself falling deeply in love with Odette, a beautiful, cultured and free-spirited Parisian. The couple will spend several idyllic weeks together, before an unexpected twist in their relationship reminds Miguel that there’s also trouble to be found in paradise. His dreams suddenly shattered, Miguel will be forced to face the consequences of his actions, in a country that is still extremely conservative and even dangerous.